History of the city of Nedroma

It is said that the history of Nedroma dates back to 875 AD, when it was built during the reign of the sons of Solomon, brother of Idris I: Flosun, which means the mountain, i.e. the top of the mountains of Tarara, its height is 1136 meters, and Aghbaloa, which is an expression that designates the source of water and the valley of Agilas, i.e. the valley of the Tigris, and Mazauro meaning the plain, etc... This is not surprising since Arabic and Berber are the two languages spoken by the inhabitants of North Africa. 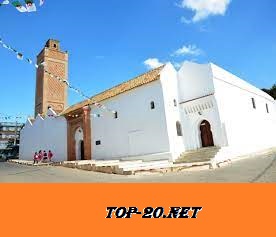 Anyway, we think that this place was chosen for the site of the ancient Ndroma, for two main reasons: the presence of the waters that gush out of the high mountains, and the easy defense of the city against its warriors, enemies and invaders.

Some of them claim that it took the place of Siga, the capital of Syphax, the king of western Numidia, who died in Rome (202) BC, and some say that it is mentioned in the documents of Ptolemy Claudius, the Greek astronomer and geographer who lived in the second century A.D. This world described it as "an ancient city built by the Romans, and outside its walls we still see traces of huge Roman buildings. ... in which there are large stone tables and alabaster columns and tombstones inscribed with Latin inscriptions (?)" (Damus) was located on the left bank of the Tafna River in the region of the Bani Meshal tribe between Tlemcen and Ndroma. Bronze medals and inscriptions have been found there, and it is the only Roman trace found in the region.

This name was associated with Damos, the legend of Decius, the Roman king in the 3rd century CE, and with the Seven Young Men or Seven Sleepers who fled the persecution of the Christians by this king and sought refuge in the cave of Mount Pion or the Cave of Tars or Ephesus in another account, all in Turkey, and they only awoke from their sleep during the reign of Prince Athor (Theodosius 2) in the 5th century CE.

If the name of its founder is not known, can we find out why it was called the word "Ndroma"? I differed in fact in the origin of the word, and some said that it was first called the city of Batha or Batha (?), linguistically meaning a large flow of sand and gravel, and this is wrong because Batha was "in the regions of Chlef, northeast of Relizane, then it was destroyed, then Abd al-Mu'min bin Ali ordered its construction..." Then it took the name of Nedroma, which is a Kumi tribe. Despite this, others claimed that the letter Dhadha had the heart of Nouna, so he gave it the name of "Anti-Ruma". Naming the second because the city of Nedroma was far from Rome and its civilization, contrary to what was said of Pomaría (Tlemcen) and Adphrates (conquests), Numeros Serurum (singer) and Siqa near the valley of Tafna and other cities near Nedroma.

As for what is indisputable, it was mentioned (in the year 278 AH - 892 AD) in the name of Flosun in the Book of Countries by Ahmed bin Wadeh al-Yaqoubi (897 AD), the well-known Arab geographer and historian who has a history in which he dealt with events before and after Islam. From Gastoy wiet, born in 1887: "Further from the city of the Alawites, that is, Sabra (the wilaya of Tlemcen), the Numâlata, that is, Lalla Mughniyeh, where Muhammad bin Ali bin Muhammad bin Suleiman was in charge, and the last city of the emirate of Bani Muhammad bin Suleiman bin Abdullah bin Hassan, so it is called Flusun, a large city whose The population consists of a group of Berber tribes of Matmata, Tarja, Jazoula, Sanhaja, Anjafa and Anjazah. " The majority of historians and researchers, including Ibn Khaldun, believe that Nedroma is the name of a communal tribe that took the place of the ancient city: Flosun.

He also mentioned it in the eleventh century and under its now known name, Abu Ubaid Allah al-Bakri (1040-1094 AD) in his book "The Ways and Kingdoms" written (in the year 1068 AD). He said about it: "... And the city of Nedroma is on the edge of the mountain Tajra, and its western and northern parts are good orchards and farms, and between it and the sea there are ten miles, and its coast is Wadi Masin, which is a very fruitful river, and it has a safe anchorage with a horse and a mooring... The city of Nedroma is a glorious walled city with a river and orchards of the world. fruit... "

As for Abu Ubaid Allah, known as Sharif Al-Idrisi (1100-1165), who traveled extensively in the countries of the Romans, Greece, Egypt, Morocco, France and Britain, he described it (in the year 1164) in his book: "Nuzha Al-Mushtaq fi Takhruq Al-Afaaq

(... It is a large inhabited city with a wall and a market, and its location is in Sanad. It has many farms, and it has a valley that flows to the east, and it has orchards and gardens full and watering much...)

It was also said that the word Nedroma is derived from the following sentence "Look at the water" or "Look at the water" in the imperative form, that is to say the sentence that the Arab knights pronounced when they saw the water, astonished at its abundance, since it was said that it came from the arabization of a Berber word, namely: "scarred and dead" or from the heart of Haha Nouna for the mispronunciation of the Berber word (Hound) " Hendruma".

These are all estimates and interpretations that have no basis in truth in many respects.What does not accept any doubt is that the name of Bandroma, its current name, was given between the ninth and twelfth century AD, according to Arab historians .

Finally, it is not known whether the city has known a prehistoric era because the dashrah that replaced it in ancient times has not left any material trace due to the ambiguity of its past, contrary to what is claimed in popular Nadromic circles. under the pretext that there are caves in the outskirts of Nedroma such as: "the roof of the cave" which may have descended there and lived It contains a people before history, and the following strange legend is presented. It is said that a people stayed and slept for months, perhaps years and centuries inside.