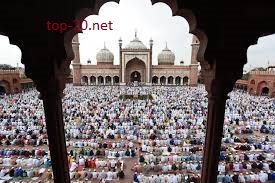 Eid al-Adha is one of the two festivals of the Islamic religion in addition to Eid al-Fitr, and Muslims celebrate it on the tenth of the month of Dhu al-Hijjah according to the Hijri calendar every year, and it comes after the end of the day of Arafat, which Muslims fast for non-pilgrims, as for pilgrims, the day of Arafa is the day they stand on Mount Arafat is part of their performance of Hajj, and Eid al-Adha, or what is called in some Islamic Countries, the great feast continues for four days. God Almighty has forbidden Muslims to fast on the first day of the festival, and Muslims perform the Eid prayer, and the Eid takbirs are part of the sunna that Muslims perform after the prayer.

Eid al-Adha is linked to the story of the Prophet Ibrahim with his son Ismail - peace be upon them - in what is known as the story of "the redemption of Ismail." God ordered him to slaughter his son, and as soon as he moved forward, he carried out what God had ordered him and obeyed Him until God - Almighty - redeemed Ismail with a large ram, which Muslims do nowadays everywhere, where they do the act of sacrificing different types of sheep, camels, cows or sheep, and they slaughter them as an approach to God and kindness to the poor and needy after distributing to them, hence the name Eid al-Adha by this name, as a derivation of the word sacrifice, sacrifice, this is what Muslims do during this holiday.

The slaughtered animals of cows, sheep and others are called sacrifices, and it is one of the rituals of the Islamic religion and one of its confirmed sunna. Abdullah bin Omar - may God be pleased with him - reported on the authority of the Messenger Muhammad - may God's prayer and peace be upon him - that he used to sacrifice during the ten years he spent in Medina. It is an act by which Muslims approach God in the first days of Eid, and until its end, in what is known as the days of al-Tashreeq, and the sacrifice is divided into three parts, as follows.

Sections of the sacrifice

One third of the sacrifice and his family.

A third is for relatives, neighbors and other people who want to give and are free to do so.

One third is given in charity to the poor and needy.

Sacrifice has conditions that must be met, including:

Be in what is called livestock, such as camels, sheep, cows and sheep.

Have a definite life span.

Not be cut into pieces.

Be healthy, not sick, unharmed or defective.

It should be for sacrifice, and no one else is entitled to it.

Eid al-Adha has things that indicate this, including:

The sacrifice is slaughtered and distributed according to the Shariah by three-thirds.

Kindness to the poor, help the needy and mercy to the needy.