Ingredients: Two cups of chicken broth. One cup of rice and vegetable oil. Half a cup of pine nuts. Five hundred grams of yogurt and chicken pieces with bones. One loaf of Arabic bread. Five grains of cardamom. Four grains of mastic. Two tablespoons of vegetable oil. One tablespoon of butter. Dry hot pepper and finely chopped parsley, to serve. One clove of garlic. Two bay leaves. A stick of cinnamon. Salt - to taste. 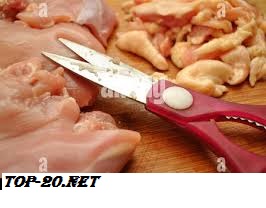 Boil the chicken pieces with each of the following: mastic, water, cardamom, cinnamon and bay leaf until cooked, then strain the chicken, take two cups of chicken broth and cook the rice with it until cooked. Clean the chicken from the skin and bones, cut the meat and cut the bread into squares. Heat a cup of oil well and fry the pieces of bread in it until they are golden, then remove the pieces from the oil and transfer them to paper towels and leave them until they become cold. Crush the garlic and add it to the milk, then salt to taste and mix the milk well with the rest of the ingredients. Fry the pine nuts in the oil until golden, then remove from the heat and add the butter, stirring until melted. Spread a layer of fried bread in the serving dish, then spread the rice on top, then sprinkle half the amount of chicken pieces, then pour the yogurt over the layers, then spread the second layer of chicken on top of the milk.

Two loaves of toast. One cup of milk. Method of preparation Prepare the chicken: Heat the oil in a saucepan, then add the garlic and onions and stir until wilted. Add chicken and turn on all sides, then cover pan until chicken is lightly browned. Add water to completely cover the chicken and add: turmeric, pepper and coriander and leave the mixture until it is completely cooked. Strain the broth and keep it warm.

Preparation of the rice:

Heat the olive oil, add the rice to it and stir a little. Add each of the following: water and salt, and leave the rice at high temperature until the boiling point is reached, reduce the temperature, cover the pan and leave it until it is completely cooked. Prepare for accuracy: Put each of: olive oil, lemon juice, garlic, chili and salt in a food processor and run the blender until smooth, then set aside. Break a quantity of toast into a serving dish, place it in the dish, then spread a precision then the hot broth over it so that the bread absorbs it well. Spread the rice on the bread, then pile up the chicken pieces, then spread the flour. Spread the milk on the crumb, then decorate with pieces of toast. Spread some nuts on the crumb, then serve directly.